Micro USB connectors exist or have existed in three forms: micro A, micro B and micro USB 3. USB 3 micro is much like micro B, but with an additional pin group on the side for twice the wires, enabling USB 3's greater speed. Like standard USB, the micro versions are plug-and-play and hot-swappable. 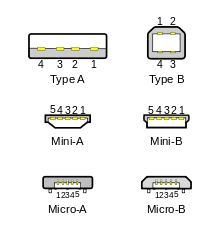 The USB peripheral bus standard was developed jointly by Compaq, IBM, DEC, Intel, Microsoft, NEC, and Northern Telecom. The technology is available without charge for all computer and device vendors.

Mini versions of the USB specification that preceded the micro versions have since been phased out. The micro A connector was also phased out in favor of the thinner, sturdier B connector. Micro USB 3 ports can also accept standard B cables. To help with compatibility, some devices include an A/B dual port.